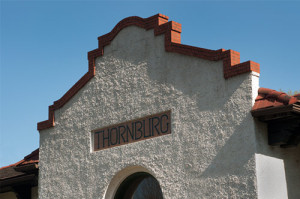 Built in 1910 and expanded in 1912, the Thornburg School was designed in the mission style by Press C. Dowler, who also designed Crafton Elementary, Ingram Elementary, and the Chartiers Country Club. The School is located in the Thornburg Historic District, which was listed on the National Register of Historic Places in 1982. Thornburg children were educated in the one-room, and later two-room, school until 1971, when Thornburg joined the Montour School District. It continues to be used today as a Community Center for the Borough and hosts the privately run Crafton Children’s Center, offering day care for children from two years old years to twelve.

The School holds the Thornburg Library, serves as a polling place for elections, and is the meeting place for Thornburg Council, at 7 PM on the first Monday of each month. The School is also home to the Thornburg Village Players, the oldest continually operating community theater west of the Alleghenies. In addition, the Thornburg Community Club, founded in 1930, presents children’s programs and activities, adult education, civic and social events at the School.

The Community Center is available for use by residents by filling out a Resident Use of Facilities Request Form, and submitting it to the Borough Secretary.